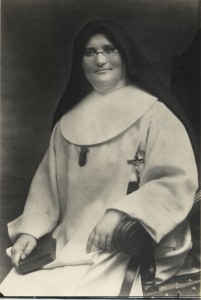 María Pilar López de Maturana was born in Bilbao on the 25th of July, 1884.

Aged 16 she was sent as a boarding pupil to the Mercedarian convent of Vera Cruz in Berriz. There she found a religious vocation that led her to join the convent in 1903. At that point she changed her name to Margarita María.

Her work focussed on the primary school, but her passion for the words and work of Jesus inspired in her the desire to transmit them: to be a missionary. 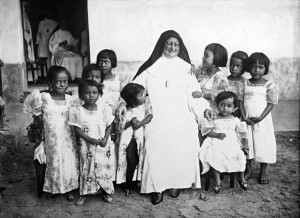 Her enthusiasm was soon transmitted to her religious colleagues and pupils, and the school set up various missionary activities: correspondence with missions, charity collection, missionary conferences, etc.

However, although she also desired to participate directly in missions, she would have to wait. It was only in 1926 that the nuns would receive permission to leave seclusion temporarily. A first expedition left Berriz for Wuhu (China), another in 1927 for the Mariana Islands and another in 1928 for the Caroline Islands and Japan. The nuns’ permission to leave religious seclusion was provisional, and so in 1930 the convent applied to be converted into a missionary institute. In this way, the nuns would go from living a contemplative life to living an active life as missionaries. The church authorities established as a condition for the change that all the nuns in the convent had to accept it, and this is what happened: the 94 nuns voted unanimously in favour of the transformation. So the Mercedarian Missionaries of Berriz were born.

A year later, Margarita María, was elected as the Superior General of the new institute. However, she had hardly begun in her new position when she fell ill with cancer. On the 23rd of July, 1934, two days before her 50th birthday, she died in Donostia-San Sebastian.
The importance of her work has led to her beatification, which took place on the 22nd of October, 2006, in Santiago Cathedral in Bilbao.